01. The Tension Slip
02. Underneath Everything Else

– was my 2008 single ….. Correction… it was an intended single, as it never was released due to financial issues. Instead it got included on a compilation disc from the danish underground label: SOPA Records (Sound Of Perpetual Astonishment) run by music enthutiast Lars Kjær Didriksen. SOPA Curiosa only got issued in 100 numbered copies. At the time The Tension Slip got rated as one of the best contributions for the compilation.

As The Tension Slip was intended as a single release in 2008, a B-Side was recorded too, but shelved. The song called “Underneath Everything Else” has been recovered and along with The Tension Slip, it’s been remastered to the highest standard and reissued as the single it was intended to in 2008.

A great thanks to my older brother Ole Høier for creating the wonderful intended sleeve capturing the concept of the track very well.

Another thanks to Henrik Corfitsen for contributing with well defined audio templates and profiling thus being a second ear to my somewhat unsecure homemastering skills. (This goes for my 2004 single as well)

The Tension Slip is available in all major digital stores and steaming services. 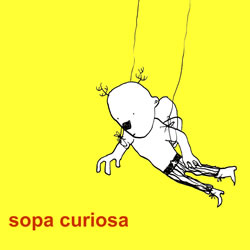 The SOPA Curiosa compilation from 2008. I think this somehow captures the song concept too, although I’m not sure it was intended.

I Start Counting / The Blueprint The Windmills of Sorrow